Han Solo is a character in the Star Wars universe. He is portrayed in film by Harrison Ford. He and his Wookiee co-pilot Chewbacca (Peter Mayhew) become involved in the Rebel Alliance against the Galactic Empire. Over the course of the Star Wars franchise, Solo becomes a chief figure in the Alliance and succeeding galactic governments. Star Wars creator George Lucas described Solo as "a loner who realizes the importance of being part of a group and helping for the common good".[1]

During Star Wars Episode IV: A New Hope, Solo and Chewbacca are indebted to Jabba the Hutt, having lost a valuable cargo. On Tatooine, Solo accepts a charter to transport Luke Skywalker (Mark Hamill), Obi-Wan Kenobi (Alec Guinness), C-3PO (Anthony Daniels) and R2-D2 (Kenny Baker) to Alderaan in his ship, the Millennium Falcon, for a payment to clear the debt. But when the crew and passengers arrive at the planet's coordinates, they discover that Alderaan has been destroyed by the Death Star, and the Falcon is then captured and held within the battle station. Enticed by the likelihood of a large reward, Solo and Chewbacca help Skywalker rescue Princess Leia (Carrie Fisher) held captive aboard the station. After delivering Skywalker, Leia, and the droids to the Rebel Alliance, Solo and Chewbacca receive payment for their services and depart. Solo has a change of heart, however, and returns to save Skywalker's life during the film's climactic battle scene, ultimately enabling Skywalker to destroy the Death Star. For his heroics, Solo is presented with a medal and is appointed a Captain of the Rebel Alliance.

In Star Wars Episode V: The Empire Strikes Back, Solo once again risks his life to save Luke, braving a snowstorm on the ice planet Hoth to rescue his wounded friend. When the Empire attacks the Rebels' base, Solo transports Chewbacca, Leia, and C-3PO to Cloud City where his old friend Lando Calrissian (Billy Dee Williams) operates to hide from Imperial agents; during the journey, Solo and Leia fall in love in the mouth of a space slug. The bounty hunter Boba Fett (Jeremy Bulloch) hired by the empire tracks the Falcon to Cloud City, and Darth Vader (David Prowse/James Earl Jones) forces Cloud City administrator Calrissian to help capture Solo, who is sealed in carbonite for delivery to Jabba the Hutt. But Lando frees Vader's other captives and they try to rescue Solo, but are too late; Fett escapes with Solo's frozen body. Fett and Solo have been known to be enemies since Solo is a smuggler and Fett is a bounty hunter.

During Star Wars Episode VI: Return of the Jedi, Solo's body is still frozen so Leia infiltrates Jabba's palace and frees Solo; but they are caught by Jabba the Hutt before they can escape. When Jabba orders them to be executed, Solo helps Skywalker and Leia in defeating Jabba and his henchmen before escaping and killing Boba Fett. Reunited with the Rebels, Solo is commissioned as a general. Along with Leia and Chewbacca, he goes to the forest moon of Endor and leads a team deactivating the force fields protecting the Empire's second Death Star, in which they are aided by the Ewoks while Luke fights his father on the death star. At the end of the film, Solo joins the Rebels in celebrating the destruction of the Death Star and, with it, the Empire. He and Leia are shown in love at the end.

After the Battle of Endor, Han and Leia have a son named Ben, who studies the Force under his uncle, Luke Skywalker. However, Ben turns to the dark side, becoming Kylo Ren, and forces Luke to go into hiding. In the years following Ben's fall, Han and Leia separate, and Han returns to a life of smuggling with Chewbacca.

On February 6, 2013, Entertainment Weekly reported that The Walt Disney Company, who bought Lucasfilm and Star Wars in 2012, is developing a stand-alone film featuring Han Solo which would take place between Star Wars Episode III: Revenge of the Sith and Star Wars Episode IV: A New Hope.[2] It was also announced that Harrison Ford will reprise his role as Han Solo in the first installment in the upcoming third Star Wars trilogy.[3]

Brian Daley wrote a series of novels, the first published in 1979, exploring Solo and Chewbecca's smuggling adventures, and Ann C. Crispin's The Han Solo Trilogy (1997–1998) further develops the character's backstory.[4] Crispin's books depict Solo as a beggar and pickpocket throughout much of his youth. He becomes a pilot and, in the process of undermining a religious fraud, falls in love with Bria Tharen, who disappears before Solo joins the Imperial Navy. Solo loses his commission and is cashiered when he refuses an order to skin Chewbacca, who had commandeered a ship carrying Wookiee children destined for slavery; Chewbacca, in turn, swears a "life-debt" to Solo. The two become smugglers, and help repel an Imperial blockade of a Hutt moon. Solo soon thereafter wins the Millennium Falcon from Lando Calrissian in a card tournament. Tharen, who has become a Rebel agent, reappears and asks for Solo, Chewbacca, and Calrissian's help in attacking a slave colony. After succeeding, Tharen's troopers steal the smuggler's valuables to aid the Rebel Alliance. To compensate their losses, Solo and Chewbacca accept a smuggling job from Jabba the Hutt; but Imperials force the smugglers to jettison their cargo, invoking the debt Solo and Chewbacca owe the Hutt at the beginning of A New Hope.

Solo plays a central role in several Star Wars stories set after Return of the Jedi. In The Courtship of Princess Leia (1995), he resigns his commission to pursue Leia, whom he eventually marries. Solo and Leia have three children: twins Jaina and Jacen and son Anakin. Chewbacca dies saving Anakin's life in Vector Prime (1999), sending Solo into a deep depression. In Star by Star (2001), Anakin dies as well, compounding Solo's despair. At the end of the series, however, Solo accepts the deaths of his son and his best friend, and reconciles with his family.

In the Legacy of the Force series, Jacen Solo becomes a Sith lord named Darth Caedus and plunges the galaxy into a bloody civil war. Han Solo disowns Jacen, but is still devastated by each new outrage his son commits. He and Leia adopt Jacen's daughter, Allana, after Jacen's death in the novel Invincible.

Solo is a reckless smuggler with a sarcastic wit;[4] he is "a very practical guy" and considers himself "a materialist";[5] but the adventures in the first Star Wars movie evoke his compassion, a trait "he didn't know he possessed".[5]

The American Film Institute ranked Solo as the 14th greatest film hero.[6] He was also deemed the 4th greatest movie character of all-time by Empire magazine.[7] Entertainment Weekly ranked the character 7th on their list of The All-Time Coolest Heroes in Pop Culture.[8] On their list of the 100 Greatest Fictional Characters, Fandomania.com ranked Solo at number 15.[9] IGN listed Han Solo as the second greatest Star Wars character of all time (behind Darth Vader),[10] as well as listing him as one of the top 10 characters who most needed a spin-off, saying he was "Arguably the coolest character in the Star Wars universe".[11]

Prince of Persia producer Ben Mattes explained that their "inspiration was anything Harrison Ford has ever done: Indiana Jones, Han Solo".[12] The Japanese manga and anime anti-hero Space Adventure Cobra has been compared by reviewers to Solo.[13][14] In preparing to play James T. Kirk for the 2009 Star Trek film, Chris Pine drew inspiration from Ford's depictions of Solo and Indiana Jones, highlighting their humor and "accidental hero" traits.[15]

Solo has been merchandised in multiple media, including action figures, video games, and other collectibles. A Han Solo action figure with "human proportions" was released in 1977 to coincide with the release of the original Star Wars, while a figure created for the films' mid-1990s re-release was criticized as "unrealistically muscled."[16][17] 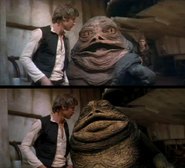 Retrieved from "https://lucasfilm.fandom.com/wiki/Han_Solo?oldid=9730"
Community content is available under CC-BY-SA unless otherwise noted.