Start a Wiki
Lego Star Wars is a Lego theme that incorporates the Star Wars saga. The first Lego Star Wars, released in 1999, included model 7140, the first Lego X-Wing. Star Wars was the 23rd intellectual property to be licensed in Lego Group history.[1] The first few sets based on the original trilogy were released in 1999, coinciding with the release of The Phantom Menace. Sets based on the prequel trilogy (Episodes I to III) of Star Wars would follow, starting with Episode I. As each new film in the prequel trilogy neared its release date, Lego issued new models of ships and scenes in those films, as well as additional sets from the original trilogy. Lego also produced models based on The Clone Wars, which was released early in 2008.[2]

In addition to the regular minifigure-scale sets, Lego has released a decent sized number for the Ultimate Collector Series. These models are considerably larger and more detailed and are meant for display purposes and cost more than regular Lego sets. Many of them include an information plaque and often a display stand. On October 10, 2007, the Lego Group released a UCS version of the Millennium Falcon, complete with six minifigures. At 5195[6] pieces, it is the second largest Lego Star Wars set ever released; and the third largest set of any collection ever commercially released (only topped by the Lego Taj Mahal). The newest Ultimate Collector Series set is the Red Five X-wing fighter.

There have been five Lego Star Wars video games:

Several films and videos based on Lego Star Wars have been produced.

In 2009, a short movie titled Lego Star Wars: The Quest for R2-D2 was aired on Cartoon Network and uploaded to the Lego Star Wars website.

In 2010, another CGI Lego film was made titled Lego Star Wars: Bombad Bounty where Vader hires Boba Fett to track down the Gungan Jar Jar Binks for an accident he caused to Vader. The film also takes place at the same time as the original movies showing that Jar Jar was responsible for the destruction of the first Death Star and was with Boba Fett on Jabba's Barge during the events of Return of the Jedi.

On July 7, 2011, a 30-minute, exclusive TV special was announced titled Lego Star Wars: The Padawan Menace by Michael Price about a Jedi Academy field trip. Tour guide Master Yoda leads a group of rambunctious Jedi younglings through Senate chambers when he senses a disturbance in the Force. Summoned to help save the Republic, he discovers that one of the younglings secretly boarded his ship...and has a taste for adventure. Meanwhile, C-3PO and R2-D2 are put in charge of the boisterous group and find themselves in over their heads. Yoda and the droids proceed to save the younglings from Sith lords. The special premiered in the United States on Cartoon Network on July 22, 2011 at 7 p.m. and in the United Kingdom on October 17 at 5:30. The DVD and Blu-ray include several special features such as The Quest for R2-D2 and Bombad Bounty as well as other short films. In America, the Blu-ray disc was a double play disc and came with the Han Solo figure as he appeared in the film.

Notable Star Wars: The Clone Wars voice actors Tom Kane, Phil LaMarr, Nika Futterman and Anthony Daniels reprise their voice roles as Yoda, Bail Organa, Asajj Ventress and C-3PO respectively. The special also includes an archived clip of Luke Skywalker (Mark Hamill) and C-3PO in the cantina from Star Wars Episode IV: A New Hope. As a running joke, Darth Vader is inserted into the film three times, causing a Lego version of George Lucas to come up and drive him out from the scene (this occurs in the scenes at: Sidious's Lair, Hoth, and the End Celebration).

On September 26, 2012, a new special titled Lego Star Wars: The Empire Strikes Out aired on Cartoon Network in the United States. In it, Luke Skywalker embarks on a mission to find and destroy the Imperial base, but is relentlessly chased by a group of fanatic girls, who think of him as a celebrity for destroying the Death Star. Meanwhile, Darth Vader engages a "sibling" rivalry with Darth Maul, in order to prove he's the best Sith Lord to Emperor Palpatine, who is constructing the second Death Star.

Sam Witwer, Anthony Daniels and Tom Kane appear as the voices of Darth Maul, C-3PO and Yoda, and other actors from the films, including Kenneth Colley, Brian Blessed, Andrew Secombe and Julian Glover, reprise their roles (as Admiral Piett, Boss Nass, Watto and General Veers, respectively). The special was dedicated to the memory of Ralph McQuarrie, designer of the original trilogy, who died the same year the special was made.

On May 29, 2013, the first part of a trilogy called Lego: The Yoda Chronicles, aired. In "The Phantom Clone", General Grevious steals the lightsabers of a group of Padawans at the Jedi Training Academy, and he and Count Dooku plan to use the lightsabers' crystals to create an army of evil super-powered clones on Kamino. Yoda and Mace Windu embark on a quest to stop them. Meanwhile, the Padawans try to retrieve their lightsabers, much to C-3PO's concern.

Part 2 of "The Yoda Chronicles", entitled "Menace of the Sith", aired on September 4, 2013. The only surviving Sith clone, Jek-14, decides not to fight for the dark side of the force and wants to be left alone to build in peace, but both the Jedi and the Sith want him on their side, with the latter planning to use him to clone an evil army. Meanwhile, C-3PO quits being the substitute teacher for the Padawans, and the Jedi Council hires Anakin Skywalker as his replacement. 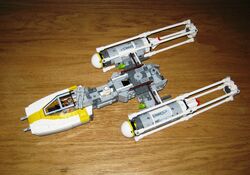 Comic book artist Greg Hyland, better known for his series Lethargic Lad and the comics on the back of Lego Batman set boxes, produced an online comic strip based on the Lego Star Wars toyline and video games.[8] The comics are largely satirical looks at flaws in certain sets, or spoofs of Lego characteristics as to how these would fit into the actual Star Wars universe. References and comparisons to other Lego themes are often made as well, for comedic effect.

Retrieved from "https://lucasfilm.fandom.com/wiki/Lego_Star_Wars?oldid=9718"
Community content is available under CC-BY-SA unless otherwise noted.