Start a Wiki
A lightsaber is a fictional weapon made popular in the Star Wars universe. A "laser sword," it consists of a polished metal hilt which projects a brightly lit blade generally about 4 feet or 1.22 meters long, though some lightsabers are of a different length. The lightsaber is the signature weapon of the Jedi order and their Sith counterparts, both of whom can use them for close combat, or to deflect blaster bolts. Its distinct appearance was created using rotoscoping for the original films, and digitally for the prequel trilogy. The lightsaber first appeared in the original Star Wars film (1977) and every Star Wars movie has featured at least one lightsaber duel. In 2008, a survey of approximately 2,000 film fans found it to be the most popular weapon in film history.[1]

There are several literary precedents in science fiction for a "sword" of pure energy that can cut through anything, notably:

Korean animator Nelson Shin, who was working for an American company at the time, was asked by his manager if he could animate the lightsaber in the live action scenes a film. After Shin accepted the assignment, the live action footage was given to him, and he drew the lightsabers with a rotoscope. Shin explained to the people from Lucasfilm that since a lightsaber is made of light, the sword should look "a little shaky" like a fluorescent tube. He suggested inserting one frame that was much lighter than the others while printing the film on an optical printer, making the light seem to vibrate. Shin also recommended adding a degausser sound on top of the other sounds for the weapon since the sound would be reminiscent of a magnetic field. The whole process took one week, surprising his company. Lucasfilm showed Shin the finished product, having followed his suggestions to use an X-Acto knife to give the lightsaber a very sharp look, and to have sound accompany the weapon's movements.[6]

The lightsaber sound effect was developed by sound designer Ben Burtt as a combination of the hum of idling interlock motors in aged movie projectors and interference caused by a television set on a shieldless microphone. Burtt discovered the latter accidentally as he was looking for a buzzing, sparking sound to add to the projector-motor hum.[7]

The pitch changes of lightsaber movement were produced by playing the basic lightsaber tone on a loudspeaker and recording it on a moving microphone, generating Doppler shift to mimic a moving sound source.[7]

In A New Hope, the original film prop hilts were constructed by John Stears from old press camera flash battery packs and other pieces of hardware. The "switched-on" sword props were designed with the intention of creating an "in-camera" glowing effect. The "blade" was three-sided and coated with a retroreflector array, the same sort used for highway signs. A lamp was positioned to the side of the taking camera and reflected towards the subject through 45-degree angled glass so that the sword would appear to glow from the camera's point of view.

Set Decorator Roger Christian found the handles for the Graflex Flash Gun in a photography shop in Great Marlborough Street, in London's West End. He then added cabinet T-track to the handles, securely attaching them with cyanoacrylate glue. Adding a few "greebles" (surface details), Christian managed to hand-make the first prototype of a lightsaber prop for Luke before production began. George decided he wanted to add a clip to the handle, so that Luke could hang it on his belt. Once George Lucas felt the handle was up to his standards, it went to John Stears to create the wooden dowel rod with front-projection paint so that the animators would have a glow of light to enhance later on in post production. Due to lack of preparation time, Christian's prototype and a second spare were used for the shooting in Tunisia, where Star Wars filming began.[8] It was discovered, however, that the glowing effect was greatly dependent on the rod's orientation to the camera, and during the Obi-Wan Kenobi/Darth Vader duel, they could clearly be seen as rods. Because of this, the glow would be added in post-production through rotoscoping, which also allowed for diffusion to be employed to enhance the glow.

Lightsabers were present in the earliest drafts as mundane laser weapons that were used alongside laser guns.[9][10] The introduction of the Force in a later revision made the Jedi and the Sith supernaturally skilled, eventually the only swordsmen. There were some variations of the lightsaber that were sometimes used by non-Force-sensitive beings, called the lightfoil. The lightsaber became the Force-user's tool, described in A New Hope by Obi-Wan Kenobi as "not as clumsy or random as a blaster. An elegant weapon, for a more civilized age."[11]

Lightsabers are hand-built as part of a Jedi's or Sith's training regimen. Each lightsaber is as unique as the one who built it, though some may bear resemblance to others like the ones utilized by Obi-Wan Kenobi and Luke Skywalker. Lightsabers can be wielded either one-handed or two-handed. The Phantom Menace introduced a double-bladed lightsaber — essentially two lightsabers bound together at the pommels — for Darth Maul, and Attack of the Clones introduced a lightsaber with a curved hilt, wielded by Count Dooku. Traditionally, there are 4 types of lightsabers: the shoto, which is used by Grand Master Yoda, the curved hilt, used by Count Dooku, the light club, which is used by Houks or other large Jedi, and the dual-phase lightsaber, which can extend to almost twice its length by alternating focus between two separate crystals inside. The video game The Force Unleashed introduced two other variants: a light-saber pike (a lightsaber with a shorter blade but a long handle, resembling a spear) and a Tonfa-style lightsaber with right-angle hilt.

Lightsabers depicted in the first two released films, A New Hope and The Empire Strikes Back, had blades that were colored either blue (for the Jedi) or red (for the Sith). In Return of the Jedi, Luke Skywalker's lightsaber was colored blue during the initial editing of the film, and appears so in both an early movie trailer and the official theatrical posters but it was ultimately colored green in the film, in order to better stand out against the blue sky of Tatooine in outdoor scenes, and this color change is also reflected in the film's re-release posters. Both green and blue became the standard blade colors for Jedi Lightsabers in the Star Wars prequel trilogy. Mace Windu's amethyst-bladed lightsaber, as first seen in Attack of the Clones, was requested by the actor Samuel L. Jackson as a way to make his character stand out among other Jedi. Jackson's favorite color is purple and he frequently requests that the characters he plays use an item of that color. In The Clone Wars, yellow is also a widely used lightsaber color.[citation needed]

A multitude of blade colors appeared in the Expanded Universe and in other Star Wars products. The original Kenner figure of Luke Skywalker in his Tatooine costume from Star Wars was released with a yellow-bladed lightsaber. While no yellow-bladed or purple-bladed lightsabers appear in the films before Attack of the Clones, they have appeared in several computer games, such as Jedi Knight, Jedi Power Battles, Jedi Outcast, The Force Unleashed, Star Wars Galaxies and Jedi Academy.

The technical lightsaber choreography for the original Star Wars trilogy was developed by Hollywood sword-master Bob Anderson. Anderson personally trained Mark Hamill (Luke Skywalker) and, in The Empire Strikes Back and Return of the Jedi, performed all the stunts as Darth Vader during the lightsaber duels wearing Vader's costume. Anderson's role in the trilogy was highlighted in the film Reclaiming The Blade where he shared his experiences as a fencer developing the lightsaber techniques for the three original movies.

The lightsaber duels in the Star Wars prequel trilogy were specifically choreographed by stunt-coordinator Nick Gillard to be miniature "stories". For these films, Gillard was the primary sword instructor for Liam Neeson (Qui-Gon Jinn), Ewan McGregor (Obi-Wan Kenobi) and Hayden Christensen (Anakin Skywalker/Darth Vader) among other actors. His goal in choreographing the action for The Phantom Menace was to create stunts that flow from the story; "You can't just think, 'I'm a stunt coordinator, I'm going to make a big stunt happen'," Gillard said. "It's all about making it tie in nicely with the film so that you don't notice the stunts."[citation needed]

In writing the prequel trilogy, George Lucas said he wanted the lightsaber combat to be "reminiscent of what had been done in the previous films but also something that was more energized. We'd seen old men, young boys, and characters who were half-droid, but we'd never seen a Jedi in his prime. I wanted to do that with a fight that was faster and more dynamic — and we were able to pull that off."[15]

According to Gillard (who would later go on to perform a cameo role in Revenge of the Sith[16]), various lightsaber combat styles were devised for the prequels and intended to further characterize their practitioners.

"I developed different styles for the characters, and gave each of them a flaw or a bonus. So with Obi-Wan Kenobi, for instance, he's got a very business-like style — when he was younger he could border on the flashy and might twirl his lightsaber a bit, because he was taught by Qui-Gon. Qui-Gon was brash, that rubbed off on Obi-Wan and Obi-Wan then taught Anakin, who was way too old to learn anyway... I think the style really worked well. The Jedi style of fighting is an amalgamation of all the great swordfighting styles. Melding them together is the difficult part — to move from a Kendo style to, say, rapier requires a complete change in body and feet movement, and this must look effortless. The style moves seamlessly between the different disciplines, but remains technically correct throughout.[17]"
―{{{2}}}

For The Phantom Menace, Gillard set out certain styles and faults for the saber-wielding characters.[18] He added that the Jedi's use of such "a short-range weapon" meant "they would have to be very good at it"; combining a variety of disciplines from various swordfighting styles to martial arts "with a touch of tennis and tree chopping", he created the style seen in the Episode I lightsaber battles.[19] 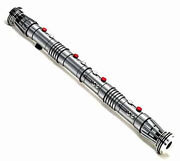 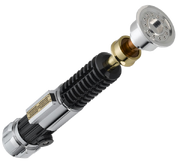 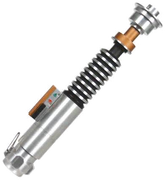 Retrieved from "https://lucasfilm.fandom.com/wiki/Lightsaber?oldid=8906"
Community content is available under CC-BY-SA unless otherwise noted.