Yoda is a character in the Star Wars universe, first appearing in the 1980 film Star Wars Episode V: The Empire Strikes Back. In the original films, he trains Luke Skywalker to fight against the evil Galactic Empire. In the prequel films, he serves as Grand Master of the Jedi Council and as a general in the Clone Wars.

In 2007, Yoda was selected by Empire magazine as the 25th greatest movie character of all time.[1] On their list of the 100 Greatest Fictional Characters, Fandomania.com ranked Yoda at number 60.[2]

Frank Oz provided Yoda's voice in each film and spent his skills as a puppeteer in the original trilogy and Star Wars Episode I: The Phantom Menace. For the latter, in some walking scenes, Warwick Davis incarnated Yoda as well. For the radio dramatizations of The Empire Strikes Back and Return of the Jedi, Yoda was voiced by John Lithgow, while Tom Kane voiced him in the Clone Wars animated series, several video games, and the new series Star Wars: The Clone Wars.

Renowned make-up artist Stuart Freeborn based Yoda on his own face and partly on Albert Einstein.[3][4][5][6] In The Phantom Menace, he was redesigned to look younger. He was computer-generated for two distant shots, but remained mostly a puppet.[7] The puppet was re-designed by Nick Dudman from Stuart Freeborn's original design.

Rendered with computer animation in Star Wars Episode II: Attack of the Clones and Star Wars Episode III: Revenge of the Sith, Yoda appeared in ways not previously possible, including his participation in elaborate fight scenes. In Revenge of the Sith, his face appears in several big close-ups, demanding highly-detailed CGI work. His performance was deliberately designed to be consistent with the limitations of the puppet version, with some "mistakes" made such as the occasional ear-jiggling.[citation needed] Rob Coleman was responsible for the character's new incarnation to the series.

Yoda is a powerful Jedi Master in the Star Wars universe. Series creator George Lucas originally wished Yoda to follow his other characters in having a full name—Minch Yoda—but instead opted to have many details of the character's life history remain unknown. Yoda's race and home world have not been named in any media, canonical or otherwise, and he is merely said to be of a "species unknown" by the Star Wars Databank. Yoda's speech syntax has been analyzed and discussed by academic syntacticians, who found it somewhat inconsistent, but could extrapolate that "Yodic" has object–subject–verb word order.[10]

The films and Expanded Universe reveal that he had trained several Jedi, including Count Dooku, who is identified in Attack of the Clones as Yoda's old Padawan Learner; Mace Windu; Obi-Wan Kenobi (partially, before Qui-Gon Jinn takes over as Obi-Wan's master); Ki-Adi-Mundi, Kit Fisto and eventually Luke Skywalker. During the animated series Star Wars: Clone Wars, set between Attack of the Clones and Revenge of the Sith, he mentions that he trained another one of the leaders on the Jedi Council, Master Oppo Rancisis. In the Star Wars prequels, it is shown that he instructs several younglings in the Jedi Temple before they are assigned to a master. This was displayed in a scene in Attack of the Clones.

Yoda makes his first film appearance in The Empire Strikes Back. Luke Skywalker (Mark Hamill) arrives on Dagobah to seek his guidance, having been instructed to do so by the Force ghost of Obi-Wan Kenobi (Alec Guinness).

Yoda doesn't initially identify himself to Luke and instead tests his patience by presenting himself as a comical and senile backwater individual, deliberately provoking both Luke and R2-D2 (portrayed by Kenny Baker). Luke is shocked when he finally realizes that this small, elderly creature is the powerful Jedi Master he was seeking. Finding that Luke has the same anger and recklessness which caused his father's downfall, Yoda is reluctant to teach him in the ways of the Force, and agrees only at Obi-Wan's behest. Before finishing his training, however, Luke chooses to leave Dagobah in order to confront Darth Vader and save his friends from the Empire's grasp at Bespin. Ignoring Yoda and Obi-Wan's warnings that he is not ready to face Vader and is being lured into a trap, Luke leaves but promises to return. Thinking his fears about Luke have been confirmed, Yoda chides Kenobi: 'told you I did, reckless is he. Now, matters are worse.' Obi-Wan laments that Luke is their "last hope," but Yoda reminds him that "there is another", referring to Princess Leia.[11]

Yoda makes a brief appearance in Return of the Jedi, set a year after The Empire Strikes Back. Yoda, now sick and frail, informs Luke that he has completed his training but will not be a Jedi until he confronts Darth Vader; he also confirms that Vader is Luke's father, which Darth Vader had told a shocked Luke in the previous film. Yoda then peacefully dies at the age of 900, his body disappearing as he becomes "one with the Force". He leaves Luke with the knowledge that "there is another Sky...walk.......". Moments later, Obi-Wan's ghost helps Luke come to the realization that the "other" whom Yoda spoke of is Princess Leia (Carrie Fisher), who is his twin sister.

In the film's final scene, after the Empire has been defeated, Luke sees Yoda's spirit looking upon him with pride, alongside Obi-Wan and the redeemed Anakin Skywalker (Vader's former Jedi self).[12]

Yoda returns as a younger version of himself in the prequel trilogy beginning with Star Wars Episode I: The Phantom Menace. The film marked the final time Oz would portrayed the character as a puppet. However, in the 2011 Blu-ray release of The Phantom Menace, the Yoda puppet was replaced by a CGI character to match the later depiction of the character. In the film, which is set 35 years before The Empire Strikes Back, Jedi Master Qui-Gon Jinn (Liam Neeson) brings the young Anakin Skywalker (Jake Lloyd) to the Jedi Council. Qui-Gon is convinced that the boy is the fabled "Chosen One" who will bring balance to the Force, and requests the boy be trained as a Jedi Knight. Yoda senses great fear in the boy, especially his attachment to the memory of his mother, and foresees 'grave danger' in Anakin's training. The council, led by Yoda, initially rejects the request.

Qui-Gon was soon mortally wounded in a duel with Sith Lord Darth Maul (played by Ray Park and voiced by Peter Serafinowicz), and his dying request to Obi-Wan Kenobi (Ewan McGregor) is that Anakin be trained as a Jedi. Obi-Wan, determined to fulfill his promise to his master, tells Yoda that he will train the boy, even without the council's permission. After failing in one last attempt to dissuade Obi-Wan, Yoda reluctantly gives his blessing to Skywalker's training and informs Obi-Wan that the Jedi Council also agrees with him.[13]

Yoda makes his first CGI appearance in Star Wars Episode II: Attack of the Clones. Set a decade after The Phantom Menace, Yoda is one of the many Jedi who are concerned about the emergence of the Separatists, a group of systems rebelling against the Galactic Republic. After the second attempted assassination of Senator Padmé Amidala (Natalie Portman), Chancellor Palpatine (Ian McDiarmid) "suggests" that she be put under the protection of Obi-Wan, who is training Anakin Skywalker (now played by Hayden Christensen). At the climax of the film, Yoda arrives in time to save Obi-Wan and Anakin and confronts Count Dooku. Although of great age, Yoda is shown to be highly agile and skilled in lightsaber combat.

In Star Wars Episode III: Revenge of the Sith, Yoda leads the Jedi Council in pursuing the mysterious Sith Lord Darth Sidious. Palpatine has by now amassed near-dictatorial emergency powers, and begins interfering in Jedi affairs by appointing Anakin as his personal representative on the Council. The Council grants Anakin a Council seat, but denies him the rank of Master, feeling that doing so would amount to giving Palpatine a vote in the Council. Embittered by the perceived snub, Anakin begins to lose faith in the Jedi.

Anakin seeks Yoda's counsel about his prophetic visions that someone close to him will die. Yoda, unaware of the intensity of Anakin's love for Padmé, his pregnant wife, tells him to "Train yourself to let go of everything you fear to lose." Unsatisfied, Anakin turns to Palpatine, who reveals himself as Darth Sidious, and manipulates the young Jedi into becoming his Sith apprentice—Darth Vader—with the promise that the dark side holds the power to save Padmé from dying in childbirth.

Sidious later transforms the Republic into the tyrannical Galactic Empire, proclaiming himself Emperor for life, and orders the clone troopers to kill their Jedi generals. At this time, Yoda is on Kashyyyk, overseeing the battle between the Separatist forces and a combined command of clone troopers and Wookiees. Through the Force, he feels the deaths of each of the Jedi as they are assassinated by their own troops. After swiftly killing the clone troopers instructed to kill him, he escapes with the help of Wookiee leaders Tarfful and Chewbacca (Peter Mayhew), and returns to Coruscant, where he and Obi-Wan fight their way into the Jedi Temple to stop a trap for any surviving Jedi. Inside, they discover that all the Jedi inside, younglings included, have been slaughtered. They then discover a holographic recording revealing Anakin as the assassin. Yoda decides to face Sidious, sending Obi-Wan to kill his former Padawan. Obi-Wan tells Yoda he cannot kill Anakin, asking instead to go after Sidious. However, Yoda insists, saying, "To fight this Lord Sidious, strong enough you are not." He also tells Obi-Wan that the Anakin he knew no longer exists, having been "consumed by Darth Vader".

Subsequently, Yoda battles Sidious in a lightsaber duel that wrecks the Senate Rotunda. At the climax of the duel, Yoda holds back the Emperor's Force lightning, creating a blast of energy that knocks him to the Senate floor. Yoda is forced to retreat and go into exile on Dagobah so that he may hide from the Empire and wait for another opportunity to destroy the Sith. At the end, it is revealed that Yoda has been in contact with Qui-Gon's spirit, learning the secret of immortality from him and passing it on to Obi-Wan.

Yoda is also instrumental in deciding the fate of the Skywalker children after Padmé dies in childbirth, recommending that Luke and Leia be hidden from Vader and Sidious in remote locations. Other than the ancient Jedi Master, only the Organas, the Lars family, R2-D2 and Obi-Wan know of their true identities.[14]

Yoda appears in the 2003 Cartoon Network animated television series Star Wars: Clone Wars. In the show, Yoda is made a General, like many of the Jedi Knights and Masters. Yoda escorts Padmé on their journey to an unspecified planet, but Yoda senses several Jedi in distress on Ilum. Using the Jedi mind trick to convince Captain Typho to take them to Ilum, Yoda saves two Jedi Knights and finds a message from Count Dooku giving orders to destroy the Jedi Temple on Ilum. In the animated series' final episode, Yoda fights side by side with Mace Windu to defend Coruscant, which is under attack from the Separatists. The two Jedi Masters realize too late that the battle is a distraction; Separatist leader General Grievous truly intends to kidnap Palpatine. The Jedi Master's effort to stop Grievous fails, and Palpatine is taken hostage, thus setting the stage for Revenge of the Sith.

Lego's Yoda minifigure was the first of their figures to have a shorter than usual height, created by giving the toy shorter legs.[16]

TomTom has included a "Yoda" voice as one of the Celebrity GPS voicings in their "Star Wars" voice series.[17] A comical clip of the "behind the scenes" recording of this is available on YouTube. 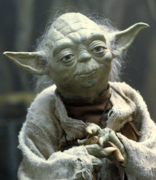 Retrieved from "https://lucasfilm.fandom.com/wiki/Yoda?oldid=12180"
Community content is available under CC-BY-SA unless otherwise noted.